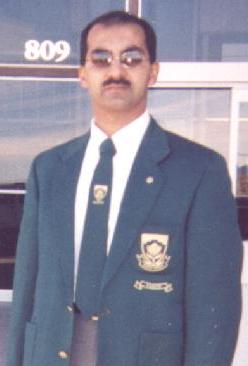 My interest in Korean martial arts started when I became a special member of the US Tang Soo Do Moo Duk Kwan Federation (now Soo Bakh Do) led by Hyun Chul Hwang. This was around 1980 and I was fortunate to obtain a copy of GM Kee Hwang's book. It was rather easy to do many of the stuff as I was training in Kyokushin style karate at the time. The forms such as Kicho Yung Il boo, etc. Pyong Ahn, etc. because of its Japanese origins were easy to adapt to. Around the same time, in corresponding with the WTF - I was asked if I did not want to open a branch in South Africa for the WTF. This eventually led me to dabble in TKD - but it was first of an ITF nature.

One of my dearest colleagues is very much into TKD and because of him also, I am administratively involved in the sport. Because of the high amount of kicks utilized by my primary system (Ashihara Karate), it makes it easier for our students to compete.